Who was the best basketball player of all time? If you hollered that question from an American sports bar, people would scream different names from every corner. The same thing might happen if you asked about history’s greatest tennis player, boxer, football player or hockey player.

But try asking this on Wall Street: Who is history’s greatest investor? You’ll likely hear one name: Warren Buffett. He’s among the four richest people in the world, despite the fact that, each year, he donates more money to charity than Donald Trump’s is worth.

Buffett has been Berkshire Hathaway’s chairman since 1965. When he first purchased shares, it was an ailing textile company. He soon turned it into an insurance firm. He used the company’s profits and insurance float to buy common stocks and dozens of private businesses. If someone had invested $100 in Berkshire Hathaway stock back in 1965, it would have swelled to more than $2 million by March 30, 2020.

You might wonder, then, how Warren Buffett is stickhandling through the most recent market drop. Did he sell everything before the market crashed? Or did he start to sell a little as the market started to plunge?

In Berkshire Hathaway’s 2020 annual report he wrote, “Occasionally, there will be major drops in the market, perhaps of 50% magnitude or even greater. But…equities [stocks are] the much better long-term choice for the individual who does not use borrowed money and who can control his or her emotions. Others? Beware!”

Those last two words are the most important. “Others? Beware!” Buffett warns investors to control their emotions. He says neither he, nor anyone else, has a working crystal ball. That’s why he says:

“I have never sold any [Berkshire Hathaway] shares and have no plans to do so. My only disposal of Berkshire shares, aside from charitable donations and minor personal gifts, took place in 1980, when I, along with other Berkshire stockholders who elected to participate, exchanged some of our Berkshire shares for the shares of an Illinois bank that Berkshire had purchased in 1969 and that, in 1980, needed to be offloaded because of changes in the bank holding company law.”

Human instinct says it must be smart to jump out of stocks before they fall, and then jump back in when you (or some expert) says stocks are at their bottom.

Buffett doesn’t believe in that. He says, “We [he and co-chairman Charlie Munger] have long felt that stock market forecasters exist to make fortune-tellers look good.”

Berkshire Hathaway covers all kinds of insurance needs… everything from automotive insurance to natural disaster insurance and, yes, even business closure insurance. Buffett uses this cash (known as an insurance float) to pay insurance claims.

Buffett doesn’t believe anyone, with any degree of consistency, can time the stock market. That’s why he doesn’t bother.

But plenty of others try. Hedge fund managers are among them. They lead their clients to believe they can make money when stocks fall. If they believe a drop is coming, they can “short the market”. This means they place bets that stocks will crash, and if they do fall hard, they collect on those bets. Some hedge fund managers keep money in cash if they think stocks will fall. By doing so, they hope to use that cash to buy stocks when they’re cheap.

But stocks can move very quickly. In just three days, from March 23rd to March 26th 2020, U.S. stocks gained 19 percent. Nobody saw that coming. When a hedge fund manager keeps money in cash, waiting for a further drop, or when they short the market, they usually end up with mud on their face. When stocks recover, professional traders rarely react fast enough to jump back into stocks. That’s because, like a great football dribbler, the market fools them with feints. Stocks will jump, then fall back. They will jump again, then fall back. Each jump looks like a false recovery. It’s one of the reasons most hedge fund managers get caught with their pants down when stocks eventually soar and keep going.

You might be wondering, “What’s wrong with that?” Well…a lot. Nobody knows when stocks will hit their lowest point. Nobody knows how many times the markets will tempt us to speculate. We just know one thing. Those who speculate full time with other people’s money (like hedge fund managers) are like emperors with no clothes.

Consider 2008. Stocks fell hard. And nobody knew when they would hit rock bottom. Some hedge fund managers shorted the market on its way down. But like a trickster, the market used several upward feints to tempt these traders to jump in and out of stocks. As a result, when the real surge happened, they were too gun-shy to react.

Professional Speculators Get Caught With Their Pants Down

Some might say this comparison isn’t fair. After all, hedge funds can invest in any asset of their choosing. According to sales lore, this helps to protect investors when stocks fall. But when we compare their results to a globally diversified portfolio of ETFs (60% global stocks, 40% bonds) the portfolio of ETFs make them look silly. It beat the hedge funds every single year between 2003 and 2019…including 2008.

In fact, over those 17 years, hedge funds (after fees) didn’t keep pace with inflation. 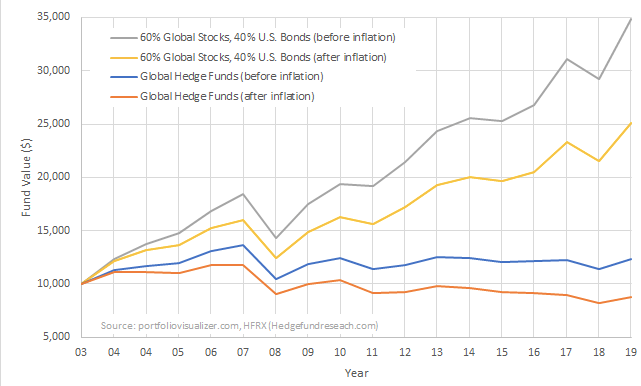 Some people might blame their high fees. Most hedge funds charge fees of 2 percent every year, plus an additional 20 percent of any profits earned. But even if they didn’t charge a penny, they would have beaten inflation by just 1.7 percent annually from 2003-2019. Over the same time period, a globally diversified portfolio of ETFs (60% global stocks, 40% bonds) beat inflation by 5.7 percent per year after fees.

In other words, hedge fund managers could have worked for free, and a globally diversified portfolio of ETFs would have spanked them silly over 17 years.

If Hedge Funds Didn’t Charge Investors Any Fees, They Would Have Beaten
Inflation By Just 1.7% Per Year
2003-2019

Based on probabilities, such speculation will cost you in the end. After the markets many dips, many surges and many feints, you’ll feel as if a casino bouncer punched you in the gut.

That’s why it’s best to stay the course. Maintain a diversified portfolio of low-cost ETFs. Invest money when you have it…as soon as you have it. Have the courage not to sell.

Most importantly, don’t let fear, greed or ego hurt your long-term gains. After all, short-term thinking will likely cost you plenty.