How Much Money Do You Need To Retire?
_

In this story, Andrew Hallam answers the question, "How much money do expats need to retire?"

My wife and I are homeless. That doesn’t mean we live under bridges or dig food out of garbage bins. Instead, for the past four years, we’ve been traveling the world. I’m writing this from our camper van, beside a lake in Guatemala. We plan to drive it to the tip of Argentina, before shipping it to Europe to continue our travels. It’s one of our retirement dreams.

Some of you might be thinking, "That sounds great!" Others might be squirming, thinking we’ve lost our marbles. That’s what makes retirement planning so darn interesting. Nobody can say what you should be doing or how much money you’ll need. I know retirees who live well on shoestrings in low-cost countries. Others are flush with cash. They have plenty of money, and they enjoy spending a small fortune every year.

How Much Money Will You Spend Each Year?

This is the first question every expat needs to answer. When I give retirement seminars, plenty of people ask, "How much does the average retiree spend?" Everyone is different. But it wouldn’t be fair to dodge that question, so here are some examples converted to U.S. dollars.

MoneySense magazine reported that the average retired Canadian household spent $28,000 a year in 2015. According to 2017 data provided by the Office for National Statistics, the average British retiree spent about $28,300 a year. In 2016, the Australian Centre for Financial Studies says the typical retired couple in Australia spent about $26,000 a year.

These figures might look low. But retirees usually spend less than they did when they were working. Plenty, for example, no longer have a mortgage. Nor do they have to continue putting away money for their retirement. They don’t have to maintain professional wardrobes or splash out on work-related transport costs. Nor do they have to save for their children’s college fees. With some luck, their little birds have long left the nest.

Here’s an example with a fictional couple, Barney and Betty Flint. Assume they want to live on $50,000 per year when they retire. They want to retire in 15 years. Perhaps they spent the first part of their careers working in their home country. As a result, they might each be entitled to partial government pensions. If they access their respective government websites, they should be able to learn how much money they’ll receive. Let’s assume it’s a combined annual income of $20,000, starting in 2033.

The couple would be happy to spend $50,000 a year during their retirement. But they might only be thinking about today’s buying power. Such a sum would buy less in 2033. Inflation can be greedy. Nobody knows the future cost of living. Sometimes, inflation runs like a pack of wild dogs. Other times, it creeps. Historically, however, developed world countries have averaged a long-term inflation rate of about 3 percent per year. In this case, the Flints would have to ask themselves, "What would provide us with the same buying power of $50,000, in 2033?"

To figure this out, they could use a compound interest calculator, such as the one pictured below, at www.moneychimp.com. 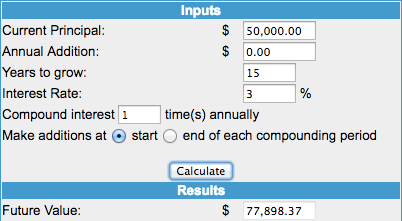 Here’s a summary below:

= $57,898 required annually from an investment portfolio.

In this case, when the Flints retire, they would need to start withdrawing $57,898 a year from their investment portfolio. But future inflation would also erode its buying power. In this case, the Flints would require an investment portfolio that would allow them to withdraw $57,898, while allowing annual increases to cover the rising cost of living. Most importantly, they would want to ensure they wouldn’t run out of money.

How Big Will The Flint’s Portfolio Have To Be?

Respected financial planner and researcher Bill Bergen says retirees should be able to sell an inflation-adjusted 4 percent of their investment portfolio each year and not run out of money. Researchers Philip L. Cooley, Carl M. Hubbard and Daniel T. Walz agree. In 2010, they published their findings in the Journal of Financial Planning. They titled it, “Portfolio Success Rates: Where to Draw the Line.”

So let’s come back to Mr. and Mrs. Flint. If, upon retirement, they needed to withdraw an inflation-adjusted $57,898 per year from their investment portfolio, this $57,898 would have to be 4 percent of their portfolio’s size. As such, they would require an investment portfolio of $1,447,450.

How Much Will The Flints Need To Save To Reach Their Portfolio Goal Size?

Whether the Flints succeed or not will depend on three things:

• How much money they currently have?

• What returns will they earn from their investment portfolio?

• How much can they save?

We can’t know how stocks will perform. But, within reason, we can control how much money we save. The tables below illustrate some examples. If the Flints want to retire in 15 years, we can assume they’ve already begun to build their portfolio. If they have $200,000 already invested, and if they added about $39,300 per year, they would slightly exceed their portfolio goal size if their money averaged a compound annual return of 6 percent. 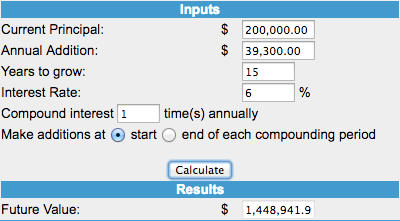 I’ve provided other examples below, assuming the Flints have more than $200,000 invested today. For example, if they have $500,000 invested, and if they earned a compound annual return of 6 percent, they could invest as little as $11,200 a year and still reach their portfolio goal size.

Of course, the annual savings required would be less if the portfolio averaged a compound annual return of 8 percent, instead of 6 percent. In fact, if the investor already had $500,000, and if they earned a compound annual return of 8 percent for 15 years, they would have $1,586,084…without having to add a penny. This would exceed their portfolio goal size of $1,447,450.

Of course, investors can’t guaranteed a return of 8 percent per year, so it pays to be prudent. Give yourself a margin of safety. Expect a lower rate of return and, if possible, save more money.