Why You Might Not Want a Higher Paying Job
_

Anita Sutton was enjoying a bottle of wine with a friend when the conversation drifted towards jobs and happiness. That was when she said it: “I don’t enjoy my job.” It was the first time she actually verbalized that. Three years previous, she was a primary school teacher with an ambitious eye on an educational leadership position. She applied for the job, won the position and doubled her income.

At first, she enjoyed the challenge. She learned new skills, new responsibilities, and worked with different people. But the role began to change. “More expectations kept being placed on me,” she says, “And I didn’t know how to say, ‘No,’ without thinking it made me look like a failure.” Anita’s job took an increasing amount of time…time away from some of her passions, like salsa dancing, painting, cycling and hiking. 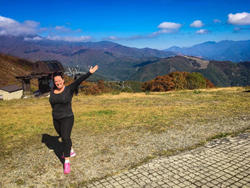 After three years, she decided to go back to teaching children. “I had a better quality of life when I was back in the classroom” she said.

As a curious guy (perhaps intrusively curious) I ask a lot of questions. When I meet someone who’s seeking a promotion, I often ask, “Why?” Most people list several reasons: the new challenge, the new skillset, the new working environment or the money. Then I ask, “Why do you want the new skillset, the new working environment or more money?” It doesn’t seem to matter what they say, at first. When I keep asking why (yes, I’m relentless) they echo the same thing: “I think it will make me happy.”

Researchers Richard Easterlin and Daniel Kahneman each independently determined that personal happiness increases with income at lower and medium income levels. But once we earn a sum that’s about 50 percent higher than our country’s median household income, more money doesn’t increase our life satisfaction.

This wasn’t just a North American phenomenon. In fact, the downward slope was even more dramatic in other countries. Below, I’ve listed income satiation levels for different regions. For example, people in Western Europe and the Scandinavian countries who earn the equivalent of $100,000 a year don’t report higher life satisfaction when they earn more than this. And when they earn significantly more than $100,000 a year, they report lower happiness levels.

Source: Purdue University, “Happiness, income satiation and turning points around the world”
*Considering this is from a 2018 published study, thresholds would be slightly higher with an adjustment for any increases in the cost of living

But why are people with high salaries less happy? The Purdue researchers offered several possible reasons, most of which aligned with Anita Sutton’s reason for quitting her high-paying job. People who earn a lot of money usually spend more time working. That means they have less time available for friends, family, passions and exercise. If the added responsibility increases stress, it can also drag a person down, hurting the relationships they have with themselves, with their friends and with their family. If added stress hurts their sleep, it can compound these problems and affect their health.

This doesn’t mean you shouldn’t climb a corporate ladder. You might be able to do so without the added stress. A promotion might allow you to spend even more time with your friends and family. That new job might give you even more time to pursue exercise and your passions outside of work.

But if you do accept a higher-paying job and it reduces your life satisfaction, consider taking one step back. That doesn’t mean you failed. Instead, it means you are truly ambitious. After all, true ambition is about living the best life that you can. I learned that by asking ambitious people, “Why?”