The Best Way To Invest Your Money
_

Hedge funds promise to make bucket loads of money during good times and bad. At least, that’s the myth. Reality is different. A diversified portfolio of index funds leaves most hedge funds in its dust.

Hedge funds might be the most sophisticated investment schemes on the planet. Plenty of people would love to dive in. But only high-net worth, accredited investors qualify to swim in the hedge fund pool. Most average people have to sit on the side. Meanwhile, the Gucci and Prada crowd swells their fortunes further.

At least, that’s the myth. Reality is different. A diversified portfolio of index funds leaves most hedge funds in its dust. I know that might sound silly. It’s like claiming a Honda Civic is faster than a Ferrari. But when it comes to investing, that statement is true.

Hedge funds promise to make bucket loads of money during good times and bad. If their managers think stocks will drop, they can place bets that stocks will fall. This is known as shorting the market. Unfortunately, nobody can consistently guess where stocks are headed. Those that guess right during one time period usually fail the next.

High-status crowds, however, still love hedge funds. And why wouldn’t they? Like the brand names they wear, and the fancy cars they drive, these are exclusive products. Whispers of their greatness run through country club estates. Financial writers magnify the myth. Many headlines scream, “Here’s What The Hedge Funds Are Buying Right Now!” As a result, many people buy these much-hyped stocks.

Hedge funds aren’t registered with the Securities and Exchange Commission. As a result, hedge fund managers can selectively post their performances. A strong performance year, after all, can attract new clients. Hedge funds traditionally charge 2 percent of their fund’s total assets every year, plus 20 percent of the profits. In other words, if a fund had $500 million in it, the fund manager would earn (at least) $10 million a year. Managers earn more when their funds gain a profit. They also boost their personal income when new investors pile in. That’s why many hedge fund managers publish results during good years only.

But when a hedge fund has a lousy year, its managers are often quiet. They don’t want potential new clients to believe their funds are dogs. Legally, they don’t have to publish their fund returns every year. Nor do they have to send them to a hedge fund performance database. Nicolas P.B. Bollen and Veronika K. Pool outlined this abuse in their American Finance Association publication, “Do Hedge Fund Managers Misreport Returns? Evidence from the Pooled Distribution”

Consequently, when Hedge Fund Research announces fund results, the performances have an upward bias. Unmasked results would look even worse if they included funds that died. Princeton University’s Burton Malkiel and Yale School of Management’s Robert Ibbotson studied hedge funds from 1996 to 2004. They discovered that 75 percent of hedge funds went out of business during that 8-year period. As a result, such funds aren’t available for data compilation. That’s why Malkiel and Ibbotson say the average hedge fund returns that were reported in data bases were overstated by 7.3 percent annually during the eight-year study.

Why Would Anyone Bet Against Warren Buffett?

People that own hedge fund companies keep the myth alive. They believe (or they pretend to believe) that hedge funds with strong track records will maintain their winning edge. But such odds are longer than a giant rat’s tail. In his 2016 letter to Berkshire Hathaway shareholders Warren Buffett wrote:

“I publicly offered to wager $500,000 [in 2005] that no investment pro could select a set of at least five hedge funds – wildly-popular and high-fee investing vehicles – that would, over an extended period, match the performance of an unmanaged S&P-500 index fund charging only token fees. I suggested a ten-year bet and named a low-cost Vanguard S&P fund as my contender.”

In 2008, Ted Seides, a co-manager of Protégé Partners, took Warren Buffett’s bet. He selected funds of hedge funds with great track records.But ten years later, he had egg on this face.

How About The World’s Most Popular Hedge Funds?

The world’s largest and perhaps most popular hedge fund firm is Bridgewater Associates. Its past performance is the stuff of legend. According to Business Insider, it had $160 billion invested in November 2018. Nina Zdinkak, reporting for Yahoo Finance, published the performance of the company’s two most famous funds from January 2013 to the end of October 2018. Manager Ray Dalio’s All Weather portfolio was the best of the two.

Compare that to a portfolio with 80 percent in a global stock index and 20 percent in a global bond index. This isn’t a cherry-picked model. A global stock index includes exposure to more than 40 of the world’s stock markets. No tactical trading occurs. A global bond market index does much the same with bonds. Such a portfolio is diversified and cheap, costing investors about 0.20 percent in annual fees. By comparison, hedge funds cost about ten times more.

Some people, however, prefer less volatility. A balanced portfolio with 60 percent in a global stock index and 40 percent in a global bond index offers decent rewards with lower risk. After all, a portfolio with a higher bond allocation has lower growth potential. But it won’t fall as far when stocks plummet. This balanced portfolio also trounced these famous funds. Between January 2013 and October 31, 2018. It turned $10,000 into $14,092.

Conservative investors might prefer 40 percent in a global stock index and 60 percent in a global bond index. Stocks beat bonds over long time periods, so this portfolio would have less growth potential. But it would be much more stable during market drops. Despite its conservative allocation, it also beat both of these famous hedge funds during a 5-year period when stocks were on the rise. It turned $10,000 into $12,862.

Hedge funds that survive report their annual performances (when it suits them) to the Hedge Fund Research firm. If $10,000 were invested in the typical surviving hedge fund in 2003, it would have grown to $13,452 by October 31, 2018. Unfortunately, it would have lost to inflation. The rising price of a roll of toilet paper beat most hedge funds. 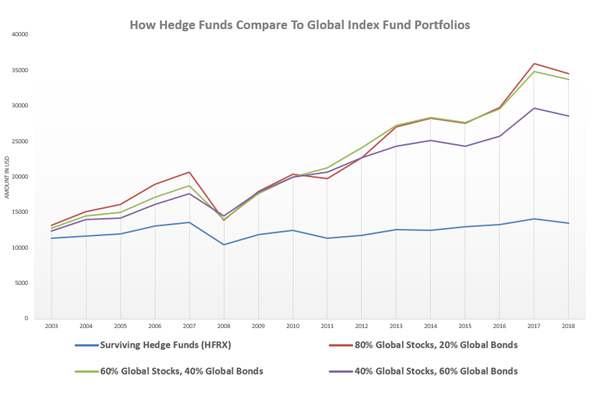 Model Portfolios That Let You Beat The Pros

A diversified portfolio of low-cost index funds is the best way to invest your money. It won’t earn profits every year. But if you’re patient, you’ll beat most professional investors–and you’ll make the hedge fund crowd look silly. You could build such a portfolio using Internaxx. Below, I’ve listed three portfolio samples. Just don’t tell the country club crowd. Some have caught on. But you might want to keep this secret to yourself.