Would The 4% Rule Work If You Retired Before A Crash?
_

Stock market fears are higher than a Coronavirus fever. Many investors worry what will happen to their hard-earned savings if stocks crash. Young investors shouldn’t worry. If stocks crash today, and they add money every month, it should juice their long-term profits.

But retirees are more afraid. After all, they aren’t accumulating assets. They’re selling them instead. Many retirees know about the 4 percent rule. If you have a low-cost, diversified portfolio, and if you withdraw an inflation-adjusted 4 percent per year, it should last at least 30 years.

The odds of the money lasting increase dramatically if you retire on the eve of a long bull run. But what if you retire right before a market crash?

The 4 percent rule was back-tested to 1926. Even if you had retired in 1929, a diversified portfolio with 60 percent U.S. stocks and 40 percent bonds would have lasted at least 30 years, if you withdrew an inflation-adjusted 4 percent per year.

But these back-tests didn’t include investment fees. Nor did they include a diversified portfolio of U.S. and international stocks. Instead, the studies only measured U.S. stocks. As a result, this unintentional cherry picking focused only on the world’s best performing market.

If you’re ready to retire, you might wonder how the 4 percent rule stacked up for those who retired before the last two major market crashes. Unlike a theoretical back-test, these investors would have paid investment fees. They should have also had diversified portfolios with U.S. and international stocks. Using portfoliovisualizer.com, I decided to have a look.

But in 2000, this new retiree might have worried. After all, U.S. stocks fell about 9 percent that year. The following year, 2001, the market dropped a further 12 percent. And if that didn’t test the retiree’s mettle, U.S. stocks cratered another 22 percent in 2002.

After retiring on the eve of this horrific market crash, you might wonder if the investor would have anything left today. After all, they would have withdrawn a total of $452,502. They would also have faced the “lost decade” for U.S. stocks. As shown below, if $10,000 were invested in the S&P 500 at the beginning of 2000, it would have been worth just $9,016, a full ten years later. 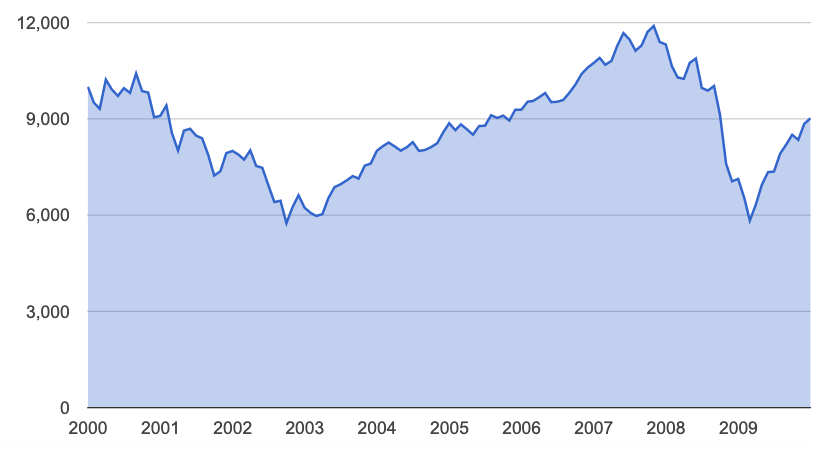 But despite this horrible start to their retirement, the retiree would have almost as much money today (more than 19 years later) as they did when they first retired.

What about someone who retired in January 2008 with $500,000? That was another nail-biting year. U.S. stocks fell 37 percent. International stocks fell even further. If the retiree withdrew an inflation-adjusted 4 percent per year, by 2020, they would have taken a total of $266,372 from their account. And despite those withdrawals, their portfolio would be worth more today than it was when they first retired. By February 29, 2020, they would have had $577,742 remaining.

Portfolio back-tests, however, aren’t future guarantees. Investors might wonder what would happen if they retired on the eve of a 1929-like market crash, coupled with runaway inflation (such as we saw in the early 80s) and low bond market returns (such as we have today). Historically that combination has never happened. But you might ask, “What if it did?”

Vanguard’s Monte Carlo calculator helps to answer that question. This nifty tool runs more than 100,000 possible scenarios. You start by entering how long you think you’ll live and your portfolio allocation. You also enter what inflation-adjusted withdrawal rate you would like to make each year. Based on the Monte Carlo calculator, a retiree who withdraws an inflation-adjusted 4 percent per year (from a portfolio of 60 percent stocks and 40 percent bonds) has a 91 percent chance of their money lasting 30 years.

If investors can stomach higher volatility, a portfolio comprising 70 percent stocks and 30 percent bonds has a 97 percent chance of lasting 30 years.

But a retiree’s biggest risk isn’t the stock market. It’s not inflation either. Instead, it’s the person they face in the mirror each day. Retirees should do their best to channel their inner Zen. Year-to-year returns don’t matter much. Even a decade-long return (like 2000-2010) can have less impact than we think. Ignore market volatility, market forecasts and market drops. If possible (I know this isn’t easy) ignore the portfolio value too.

Stick to a solid plan and have faith that it will work. That’s easier said than done. But worrying never helps. And those who act on speculation are usually the only ones that lose.