Media headlines are designed to grab people faster than great smelling burgers at a county fair. But in our click-bait world of slippery leads, it’s good not to be misled.

Consider the headline from this March 19, 2019 CNBC story:

“Passive investing, made up of funds tracking market barometers, has now taken over nearly half the stock market as more investors shun stock-pickers and flock to index funds.”

Hmmm. Indexing has taken over nearly half the stock market?

Then the article progressed to say something completely different:

“Passive management now accounts for 45 percent of all assets for U.S. stock-based funds.”

Can you see the difference?

The headline and the first line say indexing makes up the vast majority of assets in the stock market. But the story’s key point says index fund investing comprises the vast majority of money in investment funds. For the record, investment funds do not comprise the majority of the money in the US stock market. Whether that headline was meant to mislead or not, Bloomberg’s March 2021 story could have caught others off-guard…if they weren’t reading carefully: Passive Likely Overtakes Active by 2026, Earlier If Bear Market.

Once again, the story referred to investment funds, not passively managed money as a percentage of the overall market. It stated (as shown in the chart below) that the market-capitalisation of passive (indexed) investments in the United States represents 53.8 percent of all money invested in US investment funds. The bolded emphasis is mine. There’s a huge difference between “money in investment funds” and the total amount of money in the US stock market. 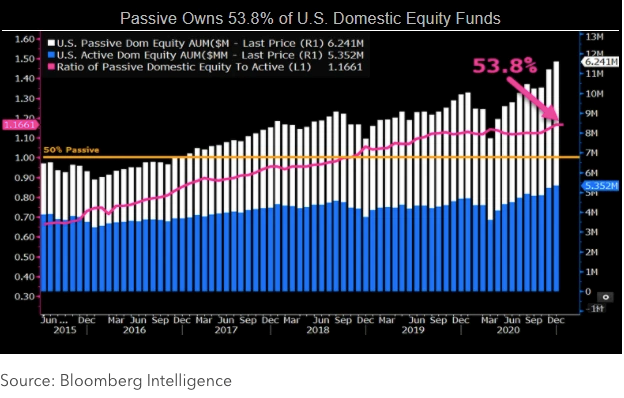 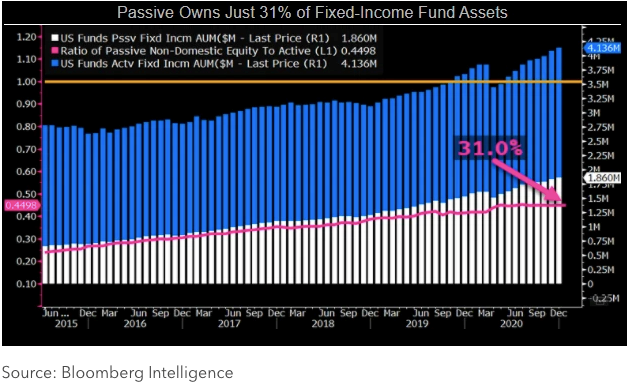 In 2017, Morningstar’s analysis stated that about 15 percent of the assets invested in the US stock market is passively managed, leaving about 85 percent actively managed. No doubt, passive management has gained popularity as an increasing number of institutional and retail investors have caught on to the superiority of low-fee investing. But despite the increased popularity of passive investing over the past five years, it still represents a relatively small percentage of the total money invested in the US market.

That’s according to Bloomberg’s Intelligence analyst James Seyffart. He writes:

“The $6.2 trillion in passive assets still accounts for less than a sixth of the U.S. stock market, with its market cap of about $40.4 trillion.”

The market capitalisation of passively managed funds compared to the the market capitalisation of the world’s non-US stock markets is a pittance. After all, passive investing hasn’t yet caught on internationally, as much as it has in the United States. You might wonder why we should even care about the dominance of index funds. Detractors of the low-cost strategy mostly comprise active managers. It’s no wonder they hate index funds. Indexes beat most actively managed funds. As active fund managers draw less money, such managers make less for themselves and their firms.