I glanced at the small computer on my handlebars as I flew down the steep hill. I was doing 57 miles per hour on skinny bicycle tires. It was 1987…and I wasn’t wearing a helmet. Back then, serious cyclists only wore helmets when they raced. And most of us wouldn’t have done that, if those weren’t the rules.

I sometimes trained with a Swedish national team cyclist. He crashed his bike while training in 1988 and fell into a comma. That year, another friend met the same fate. I didn’t see them crash, but I knew they were helmetless. Fortunately, both men recovered; they had horseshoes up their butts.

I wish I could say I began wearing helmets after that. But I didn’t. Climbing a steep road with a helmet felt like my head was in a sauna. That slowed me down. I didn’t start to wear a helmet while training until the early 1990s, when helmets became mainstream in Canada.

Bonds are much like those old bowl-shaped helmets. When things are going well, they limit a portfolio’s speed. During a long bull run–such as what we had from 2009 to 2019– bonds were about as popular as toilet bowls on heads. Plenty of people came up with reasons not to own bonds: interest rates were low; bonds always lose to stocks over long time periods. Many figured they could handle stock market volatility, without owning bonds. But what we think we can handle and what we can realistically handle are often two different things.

If, for example, stocks fall 50 percent, a portfolio with bonds wouldn’t fall as far. Sometimes, bonds even rise when stocks fall. Over the 11 years ending January 2011, U.S. bonds (in blue below) trounced U.S. stocks (in red). That sometimes happens…for a decade or even longer. Nobody can predict when it will happen next. It’s part of the random walk that all investors should accept. 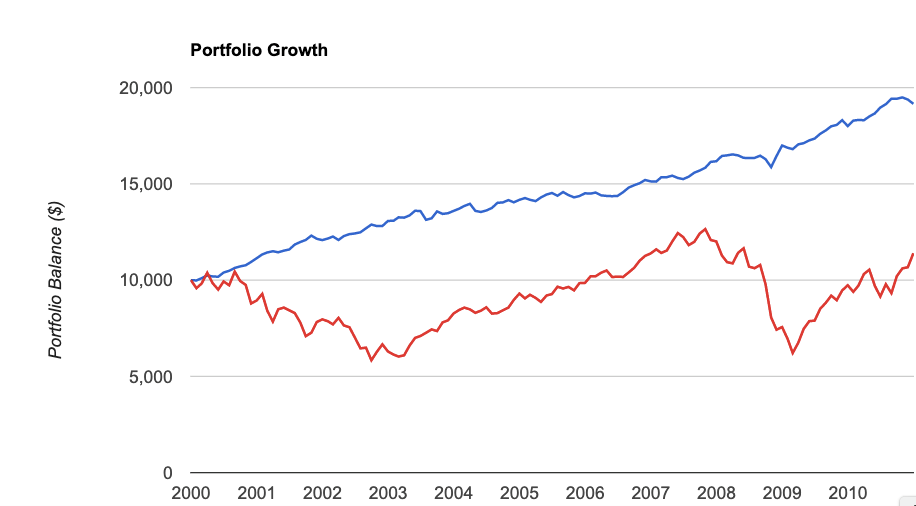 Long term, however, stocks do beat bonds. If people didn’t have emotions, perhaps they wouldn’t need bonds. But according to research by Daniel Kahneman, a Nobel Prize laureate in behavioral economics, people dislike losses twice as much as they like gains. That’s why bonds can help us out. If we build diversified portfolios of stocks and bonds, they can prevent us from freaking out when stocks fall hard.

This isn’t some kind of freaky aberration. Over the past fifty years, U.S. stocks had 10 losing years. During each of those years, intermediate government bonds made money for investors.

I’ve listed comparisons for each of those years below.

How Do Bonds Stack Up When Stocks Fall?

This doesn’t mean investors should push money into bonds if stocks have dropped or if they think they’ll fall further. That’s like a cyclist trying to snatch a helmet from a car before they hit the pavement. Smart cyclists always wear helmets. And smart investors include stocks and bonds.